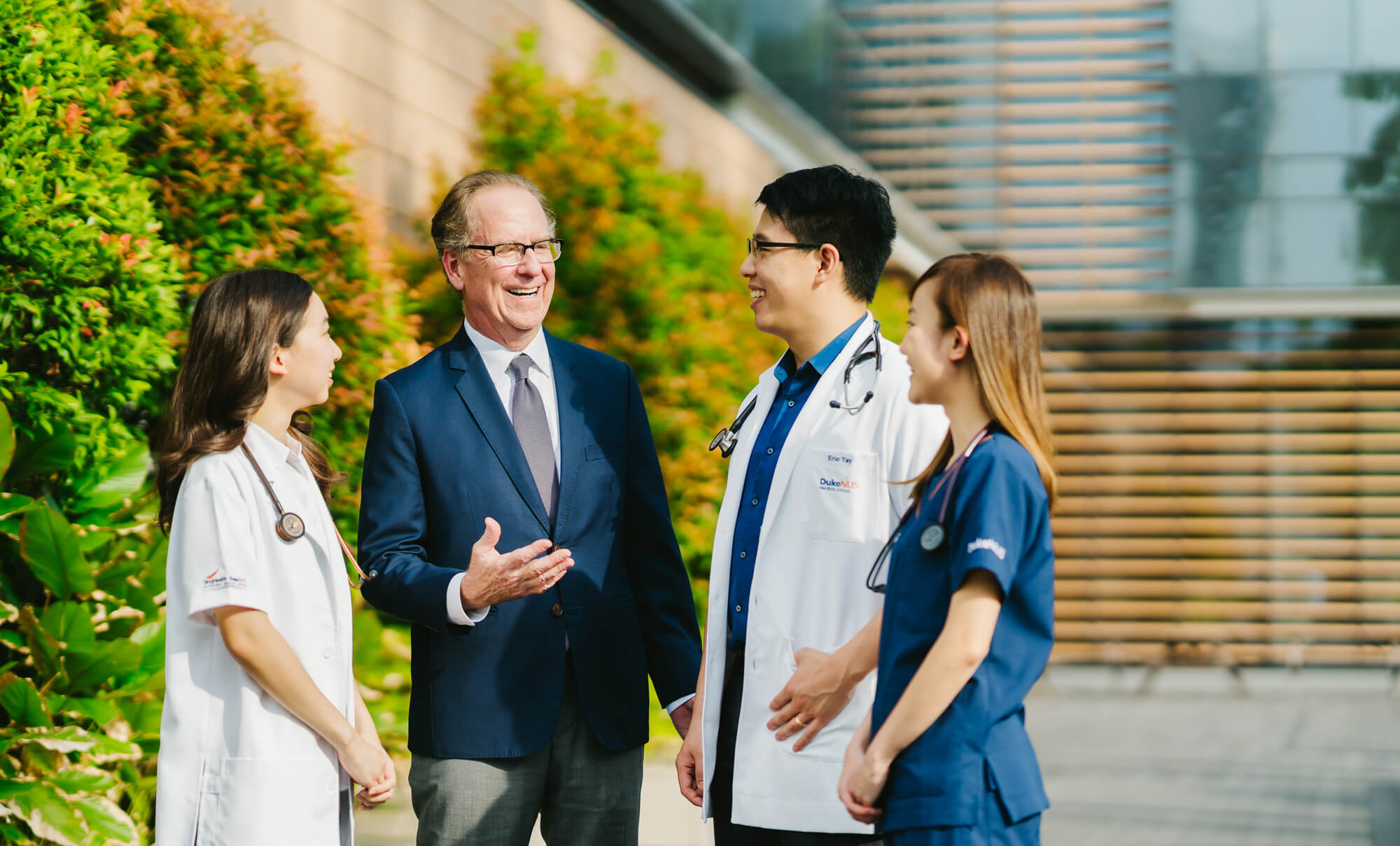 The vibrant career of Duke-NUS Medical School graduate Dr. Shashendra Aponso in Singapore today began years ago and more than 5,000 kilometres away. Born and raised in Oman, he found his calling to be a doctor as a child. Visits to his family physician sparked his first and most personal connection to the healthcare system. He saw — first-hand — the power of medicine to transform lives.

Inspired, a young Shashendra decided to join this noble profession. He too would become a clinician that not only excels in treating individual ailments but also at elevating humanity’s overall well-being.

Throughout adolescence, Shashendra’s goal remained the same. As a teen, he took on several hospital shadowing attachments during high school — all of which helped him realise that helping others was truly something he could do for the rest of his life. Whether it was a dermatologist who meticulously explained to a patient about their skin disease and how to apply their medications or an oncologist who sat down to break news of a cancer diagnosis, Shashendra encountered physicians who demonstrated that medicine was also about empowering patients and most importantly, seeing the person behind the disease.

After earning his undergraduate premedical degree from Stanford University, he sought a medical degree from a university located closer to home. His tight bond with his parents — who had relocated to Sri Lanka — inspired him to choose a world-class institution not too far from mum’s home-cooked meals. “Duke-NUS Medical School ticked all the boxes,” he says. “It was the perfect opportunity for me to continue an international medical education in close proximity to my family.”

He chose Duke-NUS Medical School’s Doctor of Medicine (MD), which is based on the innovative Duke School of Medicine curriculum. The four-year graduate programme’s team-based nature made it easy for Shashendra to connect with the brightest minds from a range of backgrounds, some of whom come from as far as the US, the UK, and Canada. The programme’s enriching in-class activities also served as the icing on the cake.

The constant interaction with his new friends and their significant academic and life experiences proved valuable. The academic backgrounds of his classmates were remarkably varied – he had friends who had majored in art history and engineering before enroling in Duke-NUS. Outside the classroom, some of his fondest memories are the community service projects that he and his friends were involved in, such as the Batam Health Screening project and Camp Simba (an annual camp for children with cancer-afflicted family members).

These lessons were facilitated by a renowned team of clinicians and scientists — nurturing Shashendra and his cohort to become tomorrow’s outstanding clinicians and curious, critical thinkers who may also contribute to medicine as researchers, educators, leaders, entrepreneurs, or policymakers. 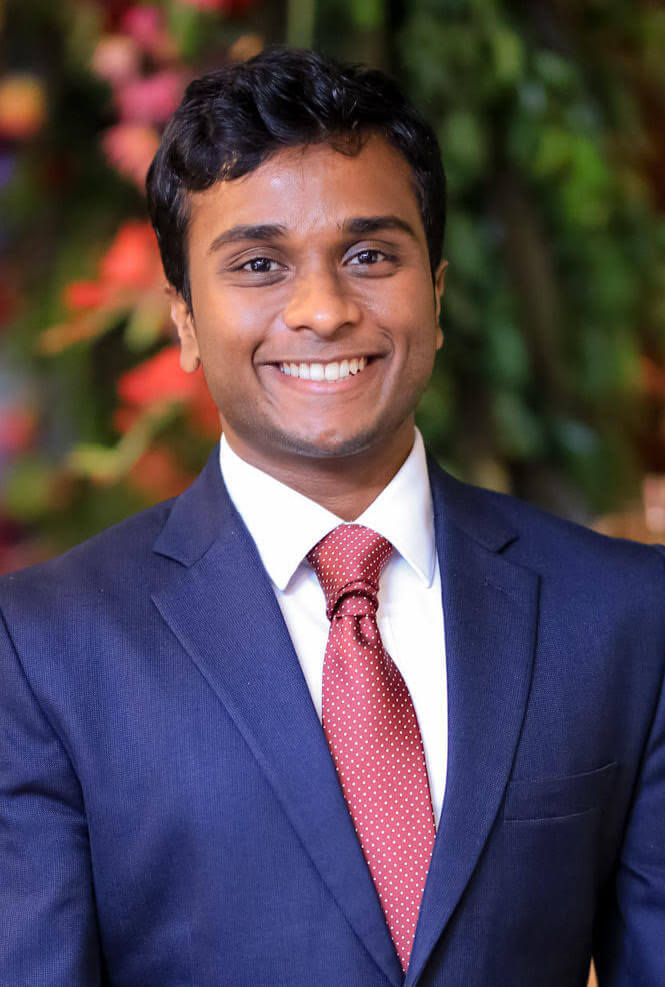 Shashendra has never felt more supported or driven. “Two things that stand out about the people I’ve worked with would be how welcoming they have been and how inspiringly hardworking they are,” Shashendra explains. “I’ve made important connections here. We are a mix of local and international students and our friendships have only grown over the years. The friends I have made in Singapore are now my family.”

These bonds were forged as they learned the fundamentals of saving lives at Duke-NUS. Many of these classes were experiential, like Shashendra’s favourite: Practice Course. These lessons taught him the basics of physical examination skills, communication skills, and ethics. “It prepared me to be self-motivated in terms of learning, being a strong communicator, and working comfortably in a team,” he shares.

The exploratory journey continued during his clerkship. Every MD student at Duke-NUS spends their second year of study learning the basics of patient care such as establishing rapport, respect and trust, and developing their clinical skills in history taking, physical examinations and management of patients. Exposure to core specialties — such as Pediatrics, Obstetrics and Gynecology, Neurology, Psychiatry, Surgery, and Medicine — allow students to use this time to identify their specific paths too.

By Shashendra’s third year, he was working on a research project with the National Heart Centre Singapore, looking at HbA1c and major adverse cardiac events in patients undergoing percutaneous coronary interventions, before presenting his work at an international research conference in Amsterdam. This achievement is a prime example of how a Duke-NUS education develops broader capabilities such as critical thinking, problem-solving, and an entrepreneurial mindset, allowing its medical students to evolve into impactful clinicians well before they graduate.

These experiences prepared Shashendra for his junior residency in Internal Medicine at SingHealth, a rigorous three-year period where he rotated through various core postings (ranging from Cardiology and Neurology to Respiratory Medicine and Intensive Care) plus electives.

The exposure helped Shashendra determine his medical specialty: dermatology. More importantly, he found a calling — one that was both “an art and a science”.

Painting has always been a hobby for him — as a dermatologist, he would be able to study visual components and work towards visible change. “Examining, describing, and understanding a skin condition is similar to critiquing and fully appreciating an art piece,” he says.

Shashendra credits his mentors for helping him develop the awareness needed to make these connections. He will never forget how Professor Thirumoorthy s/o Thamotharampillai continued to guide him once he stepped out of the classroom and into residency. Or how Professor Simon Ong used to spend countless hours running mock exams for final-year medical students. Most importantly, they taught him to immerse himself in the learning experience and reflect effectively.

“Every patient encounter was an opportunity to learn, reflect and refine one’s clinical thinking,” he says. “During my Dermatology rotation as a medical officer, I was drawn to the thought process that went into making a dermatological diagnosis.”

Today, as a third-year Dermatology senior resident at Singapore General Hospital, he has joined the ranks he looked up to as a child. He provides patient care in both inpatient and outpatient settings, treating various skin diseases.

His practice has been more than skin deep. With every successful treatment, he lifts a huge physical, economic, and psychological burden from his patients.

“A patient with psoriasis severely impacting their daily lives may walk into your clinic with skin that is nearly completely clear after starting a new treatment, telling you how much it has changed the way they live their lives,” he explains. 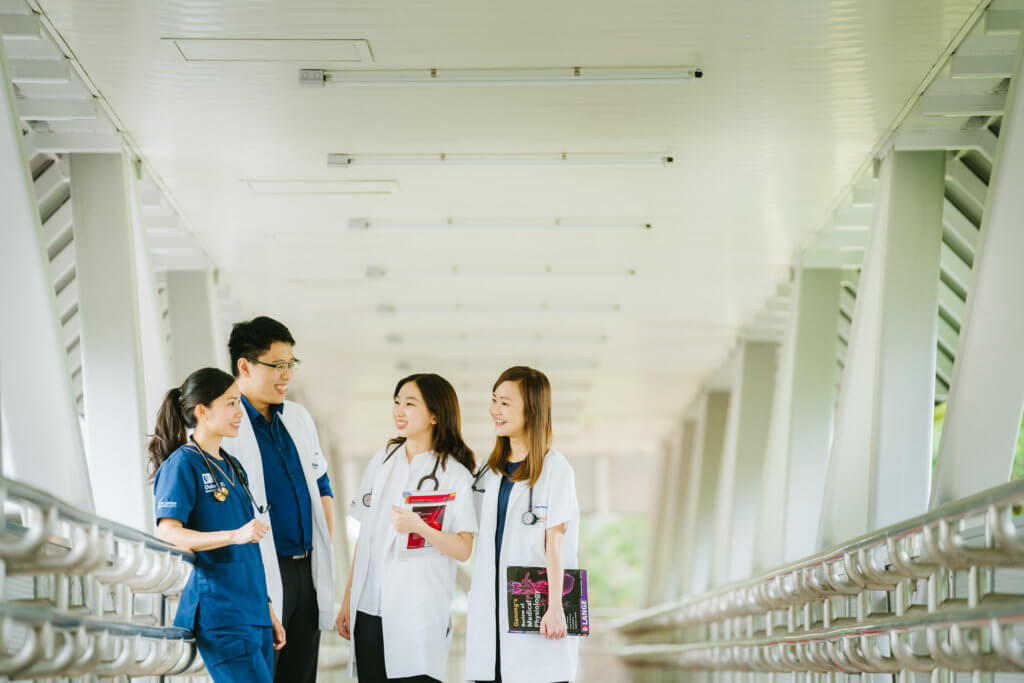 A wide range of skills to make a difference

Shashendra’s passion and professionalism are evident through his ability to wear several hats with ease — a competency Duke-NUS strives to instil within all its graduates.

With the knowledge he’s gained during his time with Duke-NUS Medical School, he is confident he will be able to continue making a difference in the lives of those with prevalent skin conditions.

Where? Singapore, of course. “Singapore is an exciting place to be as a medical professional, with top-notch academic centres and its position as a research hub,” he says.

Life here has been incredibly fulfilling for Shashendra too. He loves his “green time” and Singapore’s verdant trails have been the perfect setting for it. Outside the hospital, he trades his scrubs for a dri-fit get-up to explore MacRitchie, Sungei Buloh, and every lush botanical garden Singapore has to offer.

He encourages every aspiring doctor to follow in his footsteps sooner rather than later. “It is truly a wonderful time to be a doctor,” Shashendra enthuses. “Advances in scientific research and technology have already allowed us to live in the ‘hospital of tomorrow’. Our rising ageing population means more elderly who require medical care and therefore special considerations both in terms of healthcare and social support.”

To explore “the Lion City” while beginning your journey to medical excellence, learn more about admissions to Duke-NUS Medical School or apply here today. 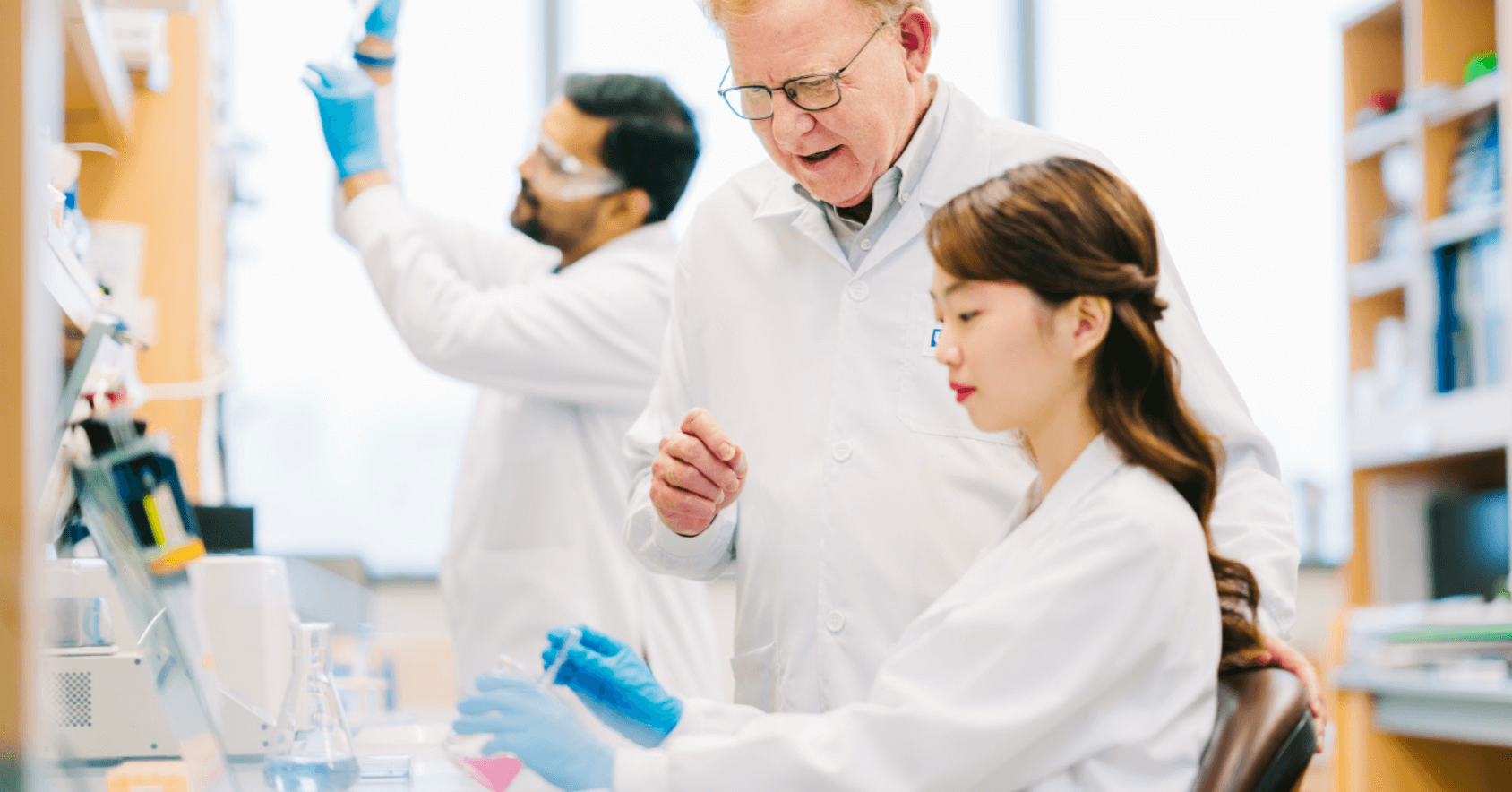 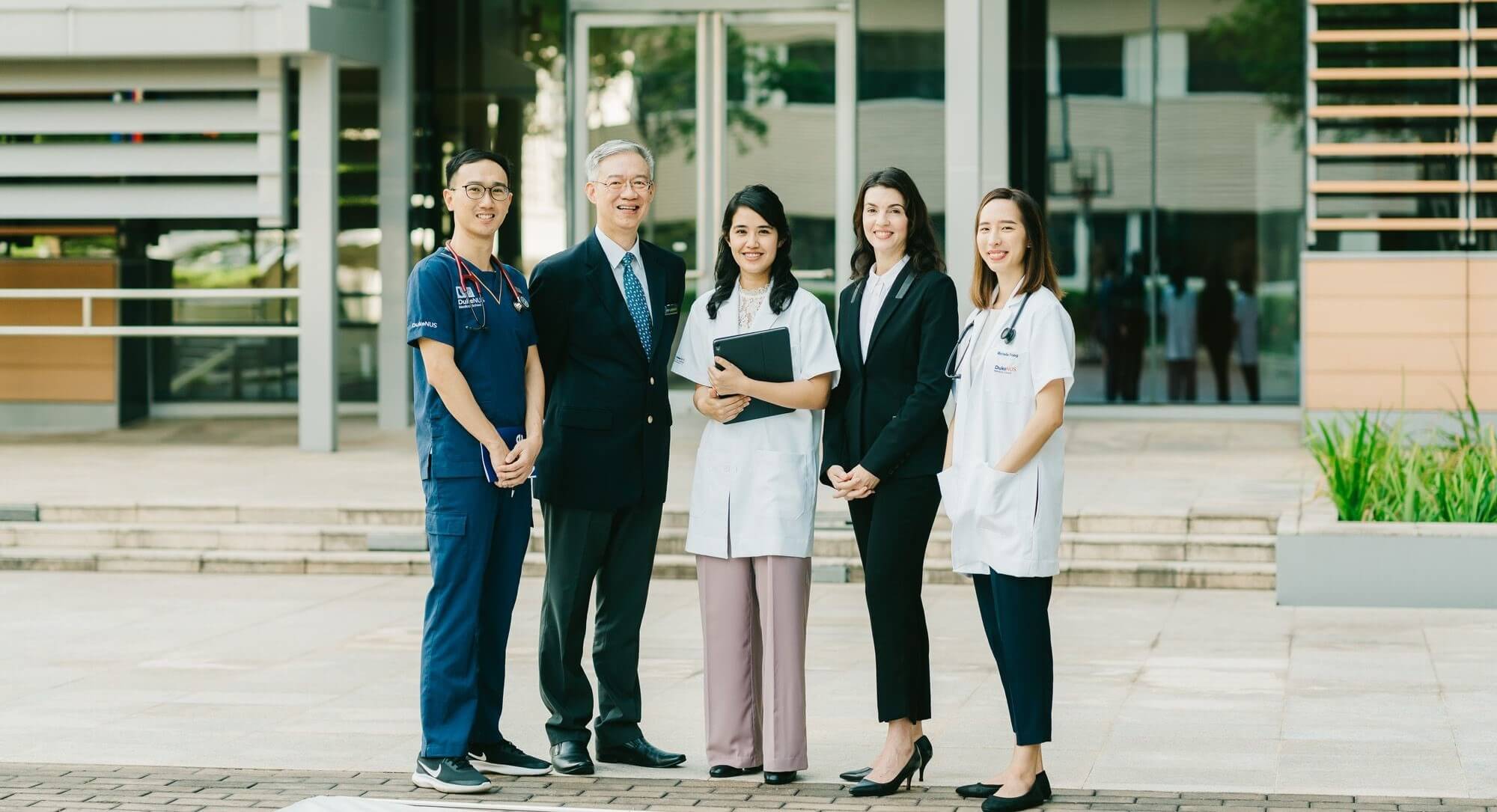