“Made in China” no longer means what it used to. After several decades of Chinese products ridiculed as poor quality and of knockoff standards, production processes in the world’s biggest manufacturing market are steadily improving. Today’s China is on its way to becoming an innovation powerhouse like Japan.

No longer relying on counterfeits, China now has its own upcoming set of contemporary designers giving their Western counterparts a run for their money. From fashion to architecture, the Chinese design scene is in an intriguing stage with plenty of products to showcase

Here are five Chinese products that would get every design head excited to study in China:

You’ve seen her on Netflix’s Next in Fashion, but she is so much more than one of the top contestants of a TV competition. Angel Chen is a serious icon among China’s brightest young talents working in fashion. The Shenzen-born designer is part of the BoF 500 — an index of the people shaping the US$2.4 trillion fashion industry as selected by the editors of The Business of Fashion — and made the 2016 Forbes China “30 Under 30” shortlist.

Her new collaboration with Adidas infuses Chinese culture into the global sportswear — Chen’s signature bold and colourful graphics are obvious for all to see.

Old Trades of Jiangsu: A Glimpse

The 2019 “Best Book Designs from All Over the World” competition was held in #Leipzig, Germany recently. The book designed by Zhou Chen from Suzhou, entitled “Old Trades of Jiangsu: A Glimpse” was honored at the event. #Jiangsu pic.twitter.com/Dq15nX3HZl

The award says it all. “Old Trades of Jiangsu: A Glimpse,” a book published by Jiangsu Phoenix Education Publishing Co., Ltd won the 2019 “Best Book Design from all over the World” competition held in Leipzig, Germany.

Instead of using regular paper, the book was made using cheap paper that old shops use to wrap refreshments, the same kind of rough bamboo paper used for ancient books. The content is about a disappearing group of people — aptly, craftsmen from old trades.

The ad goes, “This is not a phone, it’s a super camera phone”. It takes amazing photos in low light and from long distances — and looks as good as it functions. The Huawei P30 has a big display, small notch, colourful finish and a seriously slim body.

It’s a representation of just how far the phone industry in China has come in dominating the world market, winning fans through price, value and looks. Explaining the unusual, highly tactile matte glass rear pane on another Huawei best seller — the P40 Pro — Quentin Ting, the chief designer of its mobile flagship line told Digital Trends:

“When you stand in front of the ocean, it can feel like time has stopped. You hear the waves and the seagulls. Even taste the saltwater. Time has been suspended. After that moment, it’s like the play button has been pressed and you go back to reality. I call this an aesthetic experience, and we want to offer this in the P Series.”

This studio was picked by Dezeen’s Benedict Hobson as one of the few Chinese design studios and brands that made an impression at the 2019 Design China Beijing trade show.

“For me, furniture is very important. Furniture is a kind of sculpture in people’s everyday life — sculpture you can touch, sculpture that you can surround yourself with,” Chou told Dezeen.

Chou is one of China’s most famous independent designers. The Beijing native said he felt a responsibility to project a modern image of China to the world.

“I believe it’s very important for our design to reflect that China has entered the modern world, so we use very clean lines – pure, simple, contemporary forms,” he said. “But you can tell that the products were born in China – not from a western country, or Japan.” 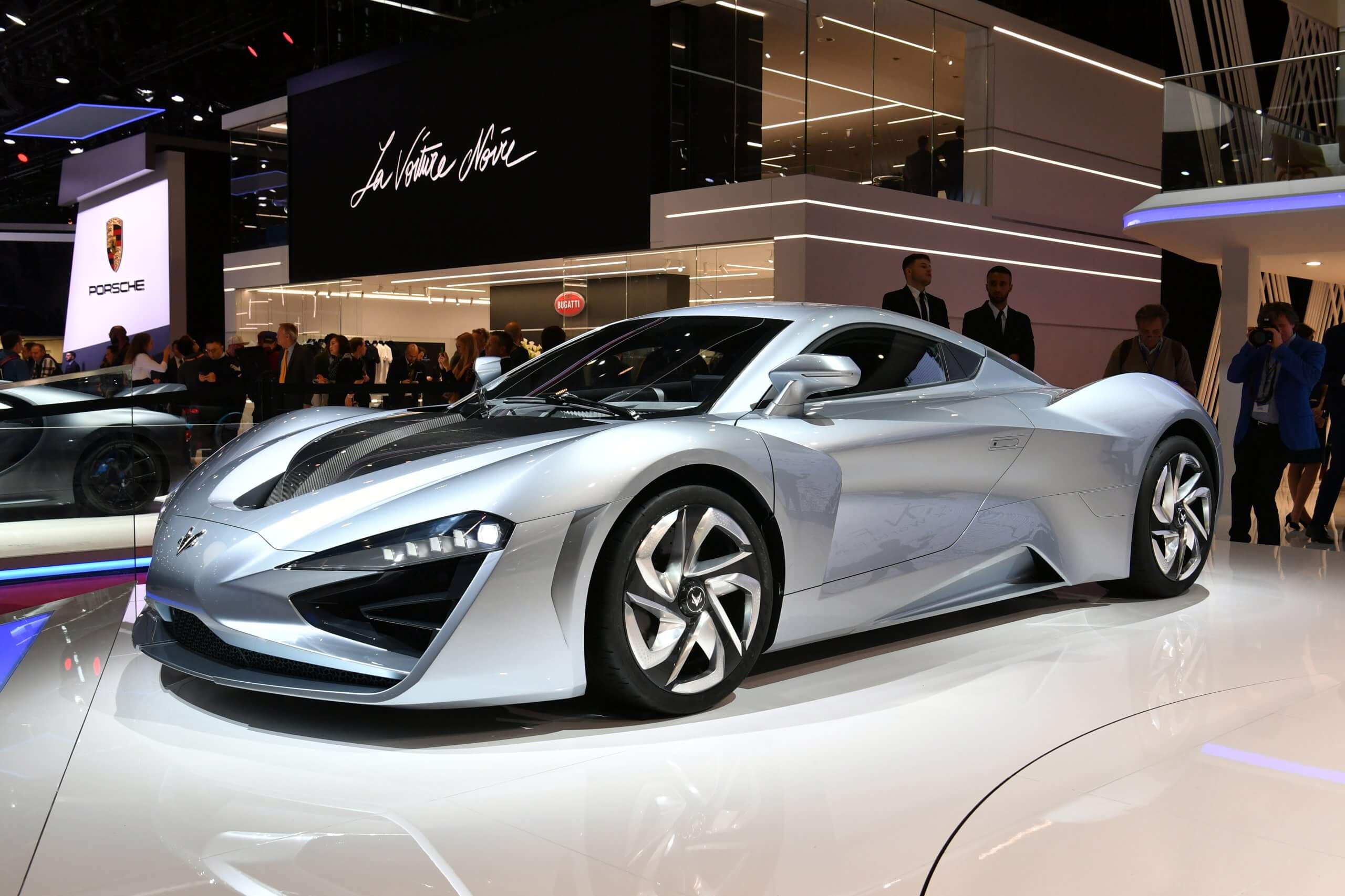 The Arcfox GT car is displayed on March 5, 2019 during a press day ahead of the Geneva International Motor Show in Geneva. Source: Harold Cunningham/AFP

Chinese group BAIC, one of the five largest automakers in the country today, are the owners of this all-electric luxury car. Described as a “supercar,” it has 1,600 horsepower and 800 Nm of torque, accelerating up to 100 km/h in under 2.6 seconds.