Dip Patel was actually born in India but moved to Canada with his parents when he was only four. There, his parents became Canadian citizens and made the decision to travel to the US to open up a business under E-2 visas.

Because Patel grew up in the US his whole life, he assumed he was the same as other US citizens. Unfortunately, struggles in getting a driver’s license and applying to colleges led him to realise he was on a different boat with US immigration laws.

This then led him to found Improve The Dream that brings awareness to Documented Dreamers — children who have grown up in the US as child dependents of long-term visa holders who face self-deportation after ageing out. Below, we speak to Patel about his journey to the US and his advocacy work in changing US immigration laws:

Tell us about how your journey to the US began.

I was born in India and when I was four, my parents moved to Canada. A few years later, my parents became Canadian citizens.

Our journey began in Southern Illinois when I was nine. Under the E-2 visa, decided to start a rural business in Illinois. This visa is available to immigrants from about 70 different countries but there are no pathways to citizenship when children age out.

“There just hasn’t been enough attention to this particular flaw in the immigration system. We’re finally at a point where people are recognizing that this is an issue that really needs fixing.”

Having attended elementary school, middle school and high school, I felt like any other American kid — I didn’t see myself as being different. Even though we had to renew our status every few years, I didn’t really face obstacles until I had to get a driver’s license or start applying to colleges.

It was then I realised I might not be able to stay after I graduate. From there, I had to start to plan and think ahead about how decisions would affect my life in the future. It’s frustrating not being able to qualify for the Deferred Action for Childhood Arrivals (DACA).

Walk us through your educational journey in the US and what you’re doing now with your career trajectory.

So, I hold a doctorate in pharmacy and I graduated two years ago. I’m now working as a full-time pharmacist. In my free time, I’m fully dedicated to Improve The Dream and changing US immigration laws for Documented Dreamers.

Was it tough to get a job after you graduated?

Thankfully, I was able to find one fairly quickly since I was very involved in school as well. That definitely helped. What was difficult was my OPT ended after a year but since my parents came through Canada, I qualified for TN status which gave me a temporary chance to stay. Again, not permanent but it was a light at the end of the tunnel.

Do you think it would have made a difference if you studied at a local institution in Canada?

Personally, the US is my home. My family is here, my friends are here and most of my relatives as well. Any child who grows up in the US should have the right to stay.

Most people assume those rights exist because it’s not brought up in conversations enough. The great thing is that now these discussions are finally taking place.

So proud of @PareenMhatre and for everything she has done to help #ImproveTheDream!

Pareen exemplifies what it means to be a Documented Dreamer and is a big reason that we have been able to garner awareness for our community. https://t.co/zV9eSP5vC5

Did this then spur you to found Improve The Dream?

I decided to attend pharmacy school — a six-year programme straight out of high school and since it was a private one, all attendees paid the same tuition fees. This made my decision to study there easier to make despite my US immigration status.

While in pharmacy school, I began advocating around the time when the Trump administration was coming in. There were talks about the DACA programme being cancelled and I knew there was going to be a push in Congress for a solution for the Dreamers. 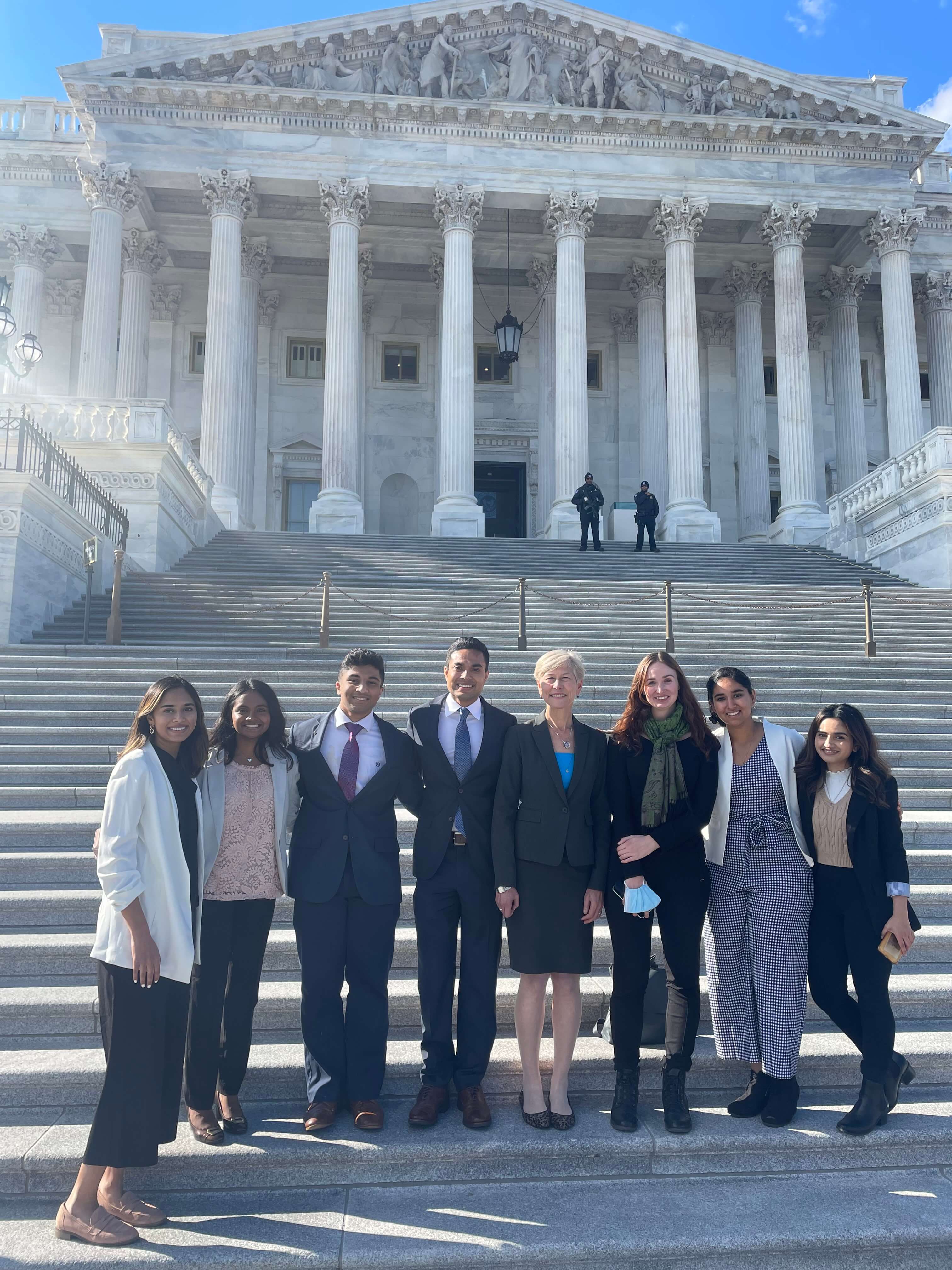 “While in pharmacy school, I began advocating around the time when the Trump administration was coming in,” he tells Study International. Source: Dip Patel

I naively reached out to a few congressional offices and senate offices and started sharing my story. There wasn’t anyone at a national level talking about the kids who had a visa dependence and were ageing out.

I didn’t know much about it but I guess I was doing it. Slowly, I realised there are people who do want to help but at the same time, these personal conversations didn’t lead to much change.

At Improve The Dream, we’ve received awareness and have a champion in Congress — Deborah Ross, who’s helped us introduce the standalone bill (America’s Children Act). It was never my intention to create this huge community of Dreamers, it just happened.

I think the greatest thing was seeing the support we were able to get. Senator Alex Padilla has also been a champion as well and recently, we worked with Congresswoman Ross and Senator Padilla to help lead 51 members of Congress to write a letter to the administration so Dreamers get included in DACA — a huge thing.

What big obstacles do Dreamers face with US immigration laws?

The DACA was created by the Obama administration to help provide protection from deportation and work authorisation. During the application guidelines made from that memorandum, the administration stated that to qualify, you had to be unlawfully present on the date they announced it.

This means that the children, who otherwise meet all the criteria but, happen to be in one of these dependent statuses are in limbo. Technically, they’re legal but there’s still no clear path for them — there are currently 200,000 Dreamers.

The progress that we’ve made has been on the legislation side so children who fall under Dreamers can get long-term visas. But, DACA isn’t the end-all best solution, it’s just temporary protection so there’s a lot more work to be done.

“The one thing that I’ve been wondering throughout my life is what did I do wrong to have so many disadvantages compared to all of my peers.”

Meet Anagh. Raised by America, but he can’t call it home. #ImproveTheDreampic.twitter.com/Yy9JEJumjG

What other plans do you have on the card with US immigration and Improve The Dream?

I’m hoping to create more awareness amongst the general public and we’re also working on state levels to help Dreamers get state tuition. For instance, the California Dream Act requires applicants to be undocumented but it doesn’t include children who are long-term visa holders.

Similarly, a lot of other states then used California’s law as guidance to do their own. With awareness, it’s possible to change those. Above all, this growing community with Improve The Dream helps people stay connected and advocate together.

It also helps people navigate the system together until change happens.

Where can people find more information on Improve The Dream and what you guys do?

We have monthly regional calls and occasional national calls through our Slack community of Documented Dreamers. So, if anyone wants to know more about US immigration for Dreamers,  they should head to our website and click the “Join” button on the front page. After a quick survey, they get a link to join the site community.